Back to Federation Peak. Well, It had only been a few months since my last visit to Federation and the lost tent poles mission. The plan for this trip was hatched over a few drinks at our Uni share house in Battery Point, Hobart. Ivo (my flatmate), Patrice (a Canadian mate Ivo met fruit picking) and my long time hiking mate Woolza had decided we should go and give it a crack. This was probably after me telling them of my two previously failed trips to the region. We all had a few free days towards the end of January so it was on!

We departed Hobart early in order to make it as far as possible on day 1. We were only giving ourselves 3 nights via Farmhouse creek but we were all very fit and felt this wouldn't present any issues as long as the weather played ball. We headed south to Geeveston and turned into the forestry roads of the Tahune area. There was a lot of activity - the road was being sealed for a new 'Tahune airwalk' attraction been built by Forestry. The road made it a heap easier to find our way to the start of the track at Farmhouse Creek. Before long we were walking beside Farmhouse creek and on our way. The weather was slightly overcast but bearable. We flew along the trail with few stops and after a few hours had our first views of the top of the peak. We passed Cracroft River around lunch then spent the next couple of hours negotiating the plains then the forest before having the customary photo at the rock where you get your first full view of Federation. Not long after this we arrived at Crest Camp where we set up camp for the evening.

We woke up and put our game faces on. Today's aim was to get to Bechervaise Plateau, set up camp then climb the peak. We set off and from the start it felt like we were all on a mission. We reached Cutting camp fairly quickly - we were very happy with our progress. But not all things are pleasant here - the next objective was the Moss Ridge obstacle course. We leapt into it with gusto and as the weather heated up, so did we as we ascended the ridge. Within another hour and a half we were on the first lookout knoll with great views of the peak and the valley we had just come across. We met a group descending here and had a quick chat before moving along. We continued up the ridge and had lunch along the way. We arrived to Bechervaise Plateau to find that some tent platforms had miraculously appeared since our last visit. This would make things more comfortable! After setting up camp and a quick rest we took in the views around us before heading towards the summit. It was about 4.30pm.

I can't describe how incredible the weather was for this trip. Just magic. After we set out from our camp on the plateau, we quickly followed the pad to the upper tiers before arriving at the top of Geeves Gully. This is where we had turned around last time we reached this point back in '99. This time the weather gods were being much nicer. We looked down the steep gully to Lakes Geeves, hundreds of meters below. When we had arrived here last time we looked down at this same drop thinking this can't possibly be the way. We knew now that it was so it was with a little trepidation that we launched ourselves into it and started to descend then zig zag our way to a flat point in the gully that also acted as a junction to change direction to head straight around the southern faces of the peak. We then made our way first up and under the giant chockstone in the next gully before sidling around to the junction with the direct ascent to the peak. We were all excited and took a few minutes to take in the views from this point. There wasn't a breath of air. We took a few photos before commencing our ascent.

We started in the shadows and climbed. Not far into the climb we negotiated one slightly exposed section which required some thought - after this it was mostly simple rock climbing but not something for the faint of heart. One slip up would see you toppling hundreds of meters to the lake below. As we climbed we came into the sunlight and really started to appreciate the grandeur of this location. We took a few photos and as we approached the final, very exposed climb to the ramp that leads to the summit, Patrice took a spectacular photo of the other 3 of us on this cliff. This very photo now adorns mine, Ivo and Tom's walls in our houses and is an everlasting memory of this successful trip. After this final climb it was a simple stroll onto the small and airy summit of Federation Peak. It was 6pm. Wow! That's all I can say to describe the feeling of standing on top of this peak for the first time on a summer's evening. Such a humbling feeling - after this, my 3rd attempt, we were there!

We signed the log book, took some customary photos and sat there just taking in the serenity. We were joined on top by a German hiker called Bernard who had come across from Hanging Lake. After spending about half an hour on top, it was with some sadness that we departed the summit and headed back to our camp. Some more photos on the way back but we made good time, arriving back at the tents in 1 hour. We took in the magnificent sunset with our new friend Bernard and went to sleep content after one my best days hiking ever.

After the previous days success, todays task was to start the trek back out. We were away just after breakfast in the sunshine and it felt like it was gonna be a hot one. We progressed quickly off the plateau down Moss Ridge and into the Cracroft valley. It was now really hot. We continued along and stopped at Crest camp for about half an hour to rehydrate, have a bite to eat and dunk ourselves in the creek. It was here I saw an enormous tiger snake - a bit unnerving but to be expected in this intense heat. After lunch it was shirts off through the next section as it was getting hotter. We were going well but by the time we reached the Cracroft river campsite we decided we'd call it a day. We could probably have made it out today but there was no hurry. We'd have one more night out here and lap up the weather. We set up camp by the river and had a relaxing evening fending off the flies!

The evening had been warm and we awoke early to hit the track. We were on our way by 7.30am and crossed the final section of button grass before heading back up over the Mt Bobs saddle and down to Farmhouse creek. It was then a short trot beside the creek before arriving back at the car at lunch time. What a trip! We gave our German Friend, Bernard a lift to his car at the start of the Huon track and then were on our way back to Hobart for a celebratory beer! 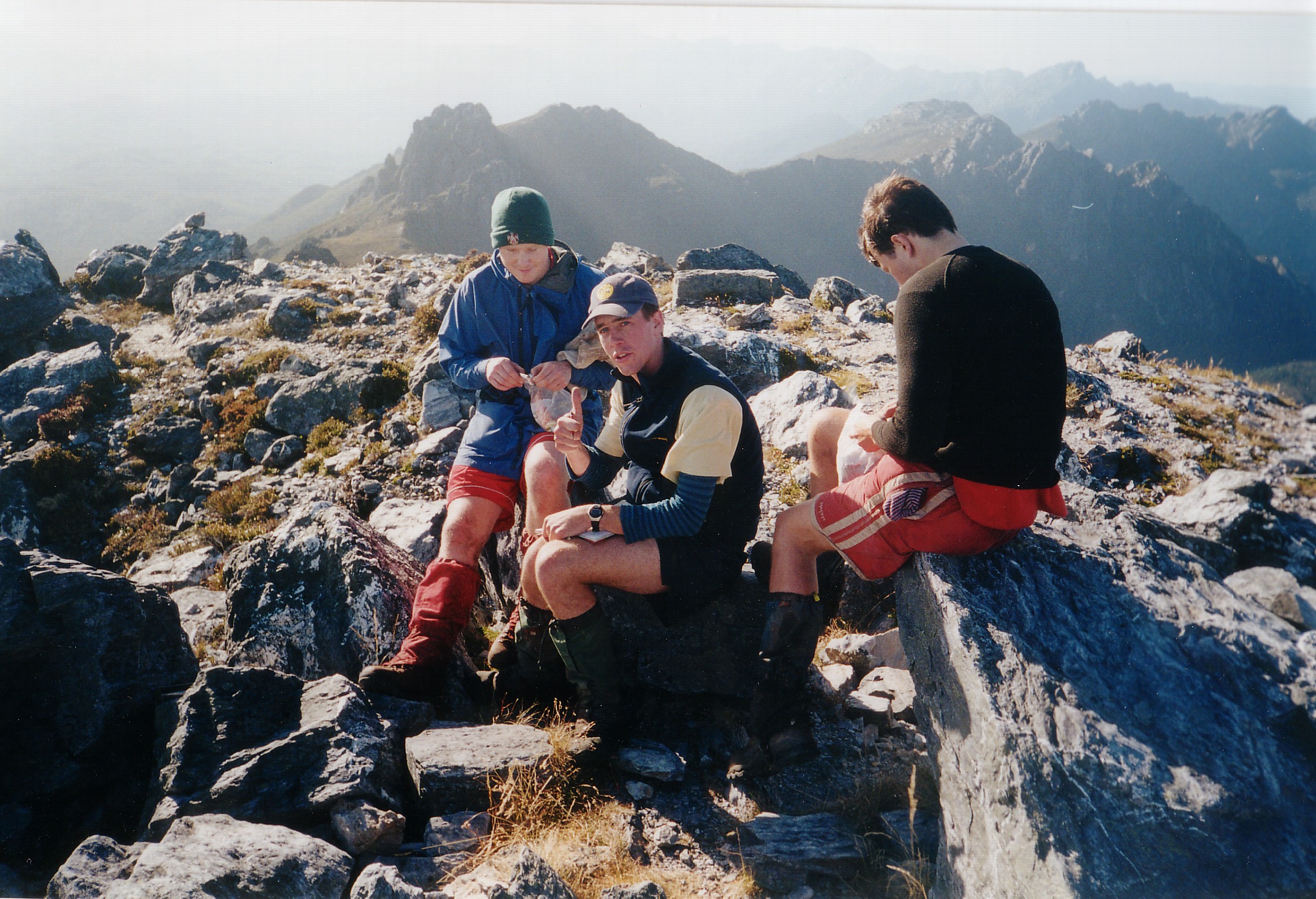 Extended Walks
A Week of Peaks
An 8 day odyssey. A trip to remember!

Mowser
Extended Walks
Walls of Jerusalem - March 2005
Another trip to The Walls.

Mowser
Extended Walks
Tyndall Range and Mt Sedgewick - February 2017
My first trip to the Tyndalls, and it didn't dissapoint.

Mowser
Extended Walks
The Southern Ranges 2020
Finally made it down to complete a range that had eluded me.

Mowser
Extended Walks
South West Epic 2004
My longest walk. 26 days in the wilderness of Tasmania. An epic to say the least.