A day walk to my last Abel in the North East

For nearly 4 years I had been trying to find just a few hours to sneak out of town to go and race up Mt Maurice. Many of the trip reports made the access in to the two track options sound pretty average and I guess this is why it now remained as my last Abel to climb in North East Tasmania.

On an opportune Friday on the 4th day of winter, I found a way to fit it in. A few of us were heading up to our lodge on Ben Lomond for a cards night so decided we'd just take the whole day off and do Mt Maurice on the way to Ben Lomond. Perfect planning.

On the Friday morning myself, Beaui, Ivo and new Abel entrant, Sam were on the road by around 9.30am. We departed Launceston and headed out through Nunamara to the turn off at Targa onto Camden Hill Road. We followed the familiar gravel roads (from previous trips to other Abels in the area) and took in the views. It was a totally spectacular winters day with the sun beaming and barely a cloud in sight. Great Abel weather! After about 1.25 hrs drive (which may have included one wrong turn). We found ourselves at a section of Maurice Road with a gentle slope and some big rutted out section. Even though we were in a 4WD, we decided it was too far to the start of the walk, so we might as well just walk from here.

We took around 5 minutes to get ready and then we were off at 10.50am. We followed the road (which improved after about 50 metres) for about 1.36km. It was a pleasant stroll taking in the forest. After 15 minutes, we arrived at the clearly signposted track commencement and headed into the bush. The walking was extremely pleasant, if not a bit wet, and we made good progress through what appeared to be old logging trails. The track was well taped with pink tapes and the occasional old school red, metal arrow however, here and there we would have to stop for a second to check our direction.

About 1.25 hours from the car, we arrived at a clearing and skirted around some more forest. This was followed by some high, thick tea tree sections before some more clearing and the final gentle climb to the summit plateau. We had barely noticed the climb and were a little surprised when we arrived on top at the trig point 1hr 45mins after departing. We thought there must be some more climbing somewhere. The weather was still brilliantly clear however the wind chill must have been taking 10 or 15 degrees of temperature off! I found the log book and filled in a quick entry while we all had a very quick snack and a summit shot. It was then on with gloves and beanie before we headed back down the way we came.

The trip back down was uneventful and 1hr 20mins after departing the top we arrived back at the road. It was then a 20 minute stroll back to the car for a total trip time of about 3.5 hrs including breaks. After arriving back at the car we found one of the tyres was a bit flat. We had an electric pump with us so tried inflating it. That only lasted a couple of kilometres at which point we had to do a tyre change. With the thought of Ben Lomond coffees and beers on our minds, we changed it quickly and were then back on the very nice and smooth Camden Hill Road through to Blessington and up to Ben Lomond! A great day out followed by almost as good an evening :) To see the video, click on this link. 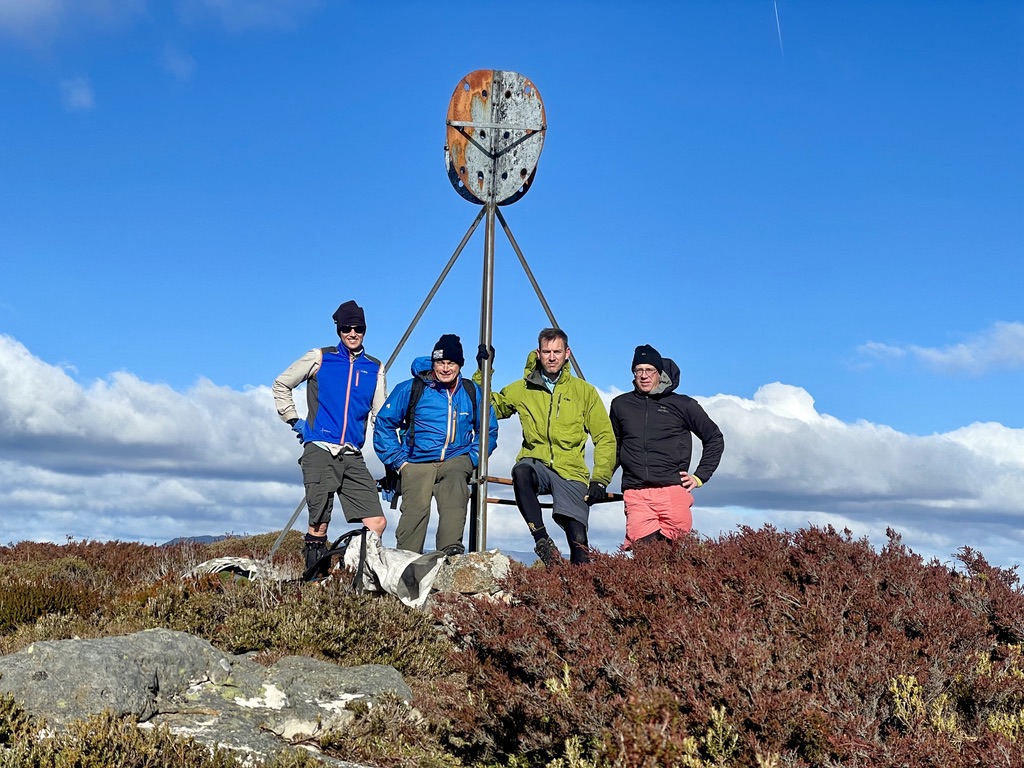