Well, this one had been on the ‘aiming to do list’ for some time. Back in January 2018, Crawf and I had attempted a very quick overnighter walk to Wild Dog Tier (one evening after work) from the north via Dixons Track. On that occasion we had fallen about 4km short of our goal having started walking at 6pm on a summers evening. Making it across the plateau, towards the peak, during the night, the temperature plummeted and we awoke to deep snow (mid January) and a quick dash back out was made.

I had been wanting to head back ever since and had planned a trip in January this year however the now much publicised fires put a stop to that attempt. This new opportunity occurred when we planned a ‘boys cards night’ at Woolza’s shack at Great Lake. After an enjoyable evening of cards, we awoke almost too early on the Saturday and after a home cooked egg and bacon muffin, we were on the road for the short drive to Bernacchi. We turned off at Liawenee and drove towards Thousand Lakes Lodge, our starting point. The trail of devastation left by the Central Plateau Fire was obvious. Both sides of the road were charred and we tried to imagine how intense it must have been.

After twenty minutes we arrived at the Lodge and parked our car just beyond on a small knoll overlooking the Lake Augusta impoundment. Wild Dog Tier stood prominently to our North so we didn’t mess around and got ready in a blistering cold wind before heading into some low scrub a few minutes later.

We strolled across the plateau through some thick scrub which quickly opened up to marshy grass and low alpine scrub. But we were pleasantly surprised to find the going under foot was firm. This was nice as we were all feeling a little ‘tired’ and ‘under the weather’ from the previous evenings cards. The wide open space with a clear route ahead was welcome.

We made good progress and were soon stripping off the layers as we warmed up. We came to a larger tarn, almost a lake, and then made our way towards the base of the tier. After about 1 hours walk we started the gentle climb. These sections entered some sparse eucalypt tree stands which then petered out as we arrived at the base of the scree leading up the side of the tier. There was also plenty of hardened snow about which made things a little easier underfoot. Some rapid progress was made up the peak. After 2 hours we took a turn to the north east and made a beeline for the main summit. We were now in white out mist and relied on our compasses in our watches for a rough line. A further twenty minutes on, we made another small ascent up a final hill before arriving at the summit of Wild Dog Tier 2hrs 45mins after departing the car. Quicker than we had expected.

We stopped for a break and had some lunch and while we did, the mist cleared to give us some views to the surrounding area. We had good views North and to the West as well as back towards the car. It was actually a more scenic spot than I was anticipating.

After discussing different return routes, we settled on heading back out the same way we had come in. We retraced our steps but this time with views and we took time to take them in. We followed the top of the peak before heading back down to the plateau via some nice big snow drifts! Progress was quick and after 2 hours we were back at our vehicle.

Overall a great day out and I reckon I’ll head back to Wild Dog Tier. We drove home to Launceston in about an hour and a half and slept very well that night. 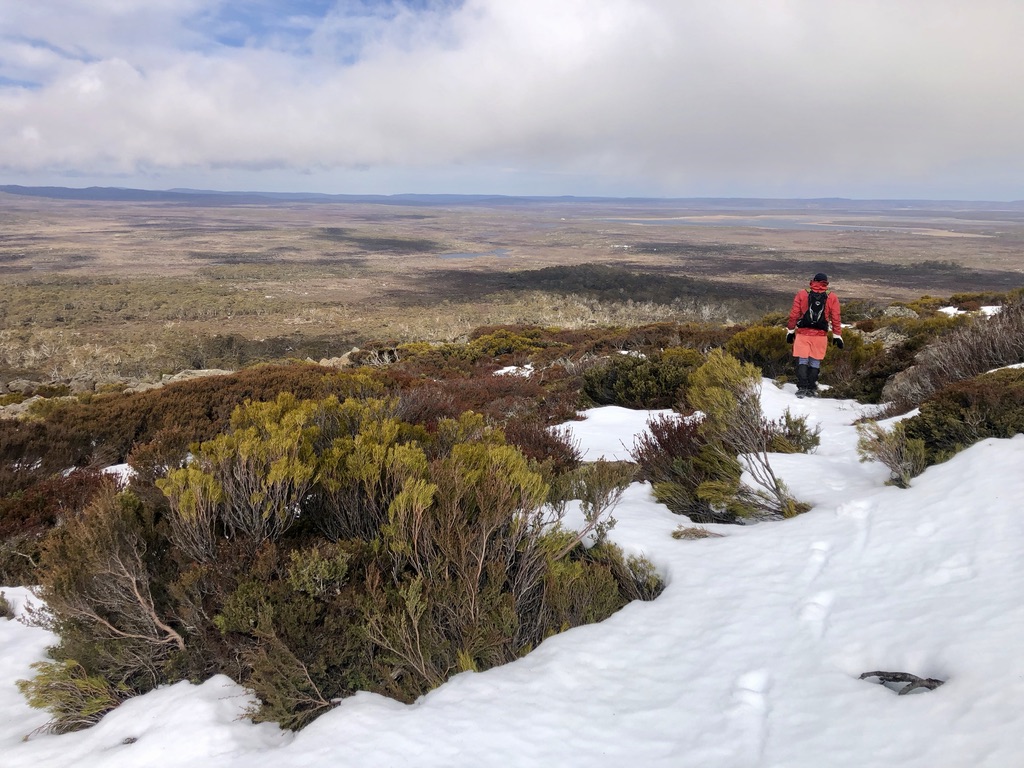