From Launceston, Ragged Jack stands prominently by Ben Lomond's side. It's an obvious and pretty 'bad ass' looking peak that has always enticed me. But until now, I had never ventured up it. Well, the opportunity had arisen. I had  most of the day to spare so dropped the kids off at school and headed on the road out to Ben Lomond. After half an hour or so I arrived at the familiar turn off and headed up the mountain road turning off again shortly after into Ragged Jack Road. It was about another 20 minutes along here to the start of the trail.

It was a beautiful Autumn day and I put my daypack on and headed off up the fire trail that leads to the peak. From the start I really put the foot down and made my way up the fairly steep trail quickly. Shortly into the walk, I crossed a lovely creek and continued up the hill, arriving at a set of several obvious cairns on the right of the trail half an hour after leaving the car. Everyone had told me that, from here, things got a bit scrubby - especially on the top plateau of the peak. No worries, I had scrub gear packed.

I followed the fairly obvious pad and cairns up the through the forest and after another 10 minutes, arrived at a scree field in amongst the trees. Climbing this quickly I continued following the cairns before arriving at a nice open grassy plateau after about 50 minutes. It was a magnificent day and I had some good views  from here with a view directly up to both peaks that comprise Ragged Jack. Cliffs lined each the summit plateaus with a saddle in between. Today, I was heading to the Abel on the south eastern end. Ahead of me lay a climb through a large boulder field. There were cairns that looked as if they were heading up towards the saddle between the two peaks. This is the way most of my friends had been and the worst scrub they spoke of lay from the saddle up to the peak. As I took in the vista, to me, a fairly obvious line looked to be to head straight to the summit cliffs through the boulder field. It then looked like a final climb could be made through a chute to the top.

I decided to take my line and headed off up through the scree. I was making great time and I quickly made my way to the top of the boulders even spotting a few cairns on the way up. I arrived at the chute I had eyed off from the bottom and had a final short and easy climb up a couple of rocks on to the rim of the summit plateau. Easy! It was then only about two hundred meters along the rocky rim to the summit cairn of the Abel. Hadn't needed the scrub gear at all!

I arrived on top 1hr 20mins after leaving the car - I was expecting the ascent to take a lot longer so I sat around on top for a while taking a few photos and enjoying the view. There wasn't a breath of wind. I had a good look at Mensa Moor which I had climbed a couple of years previously on the 'Messy Mensa Moor' trip. It was not far away. Also right beside me, was the north western summit. It looks more spectacular and I half thought of heading up there today but decided against it. Think I'll bring the kids up there another time.  After a snack and nearly half an hour on top, I packed up and headed back down the same way I had come up. I was back at the firetrail in half an hour and back at the car 50 minutes after leaving the summit. What a great short day walk. Leaving Launceston just after 9am, I was back by 2.30pm. Highly recommend this walk. I know I'll be back soon to do the north western summit! 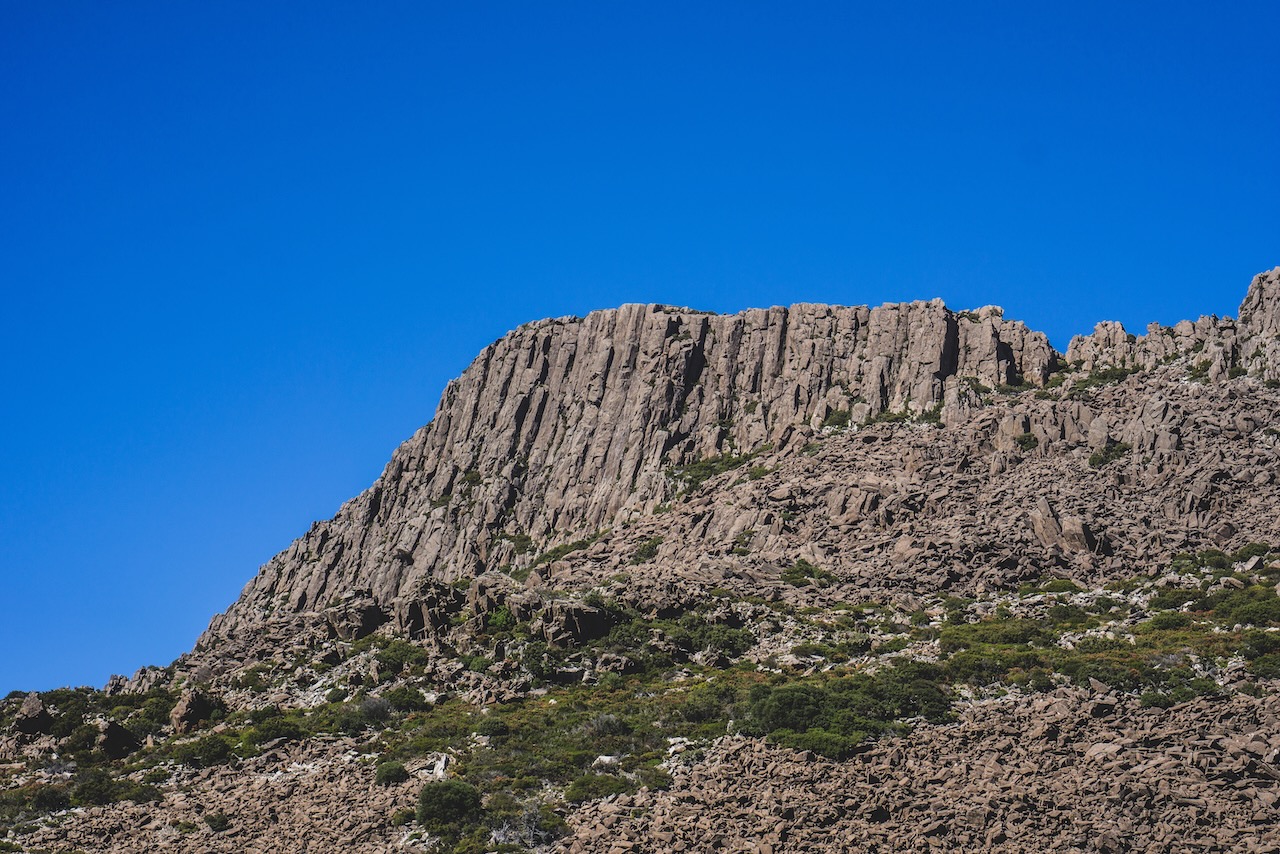 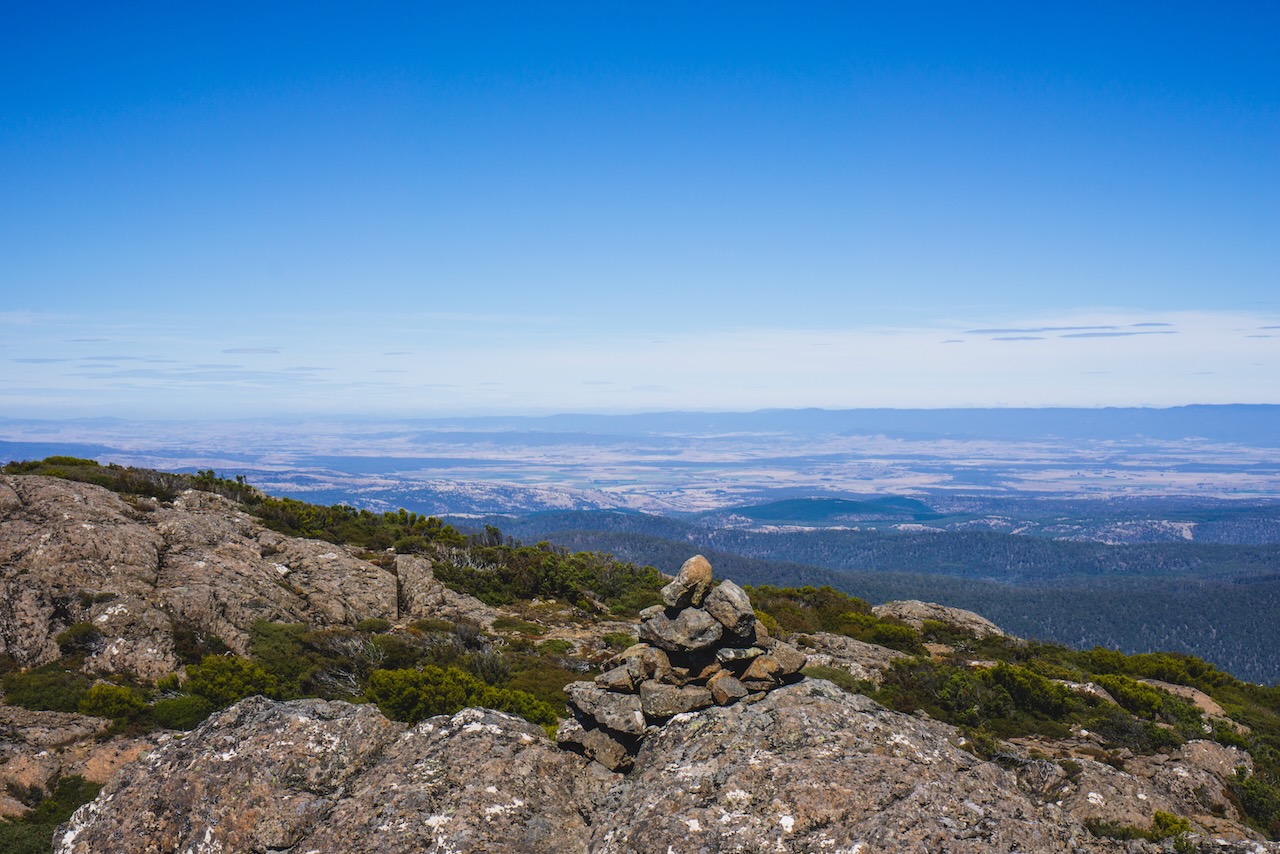 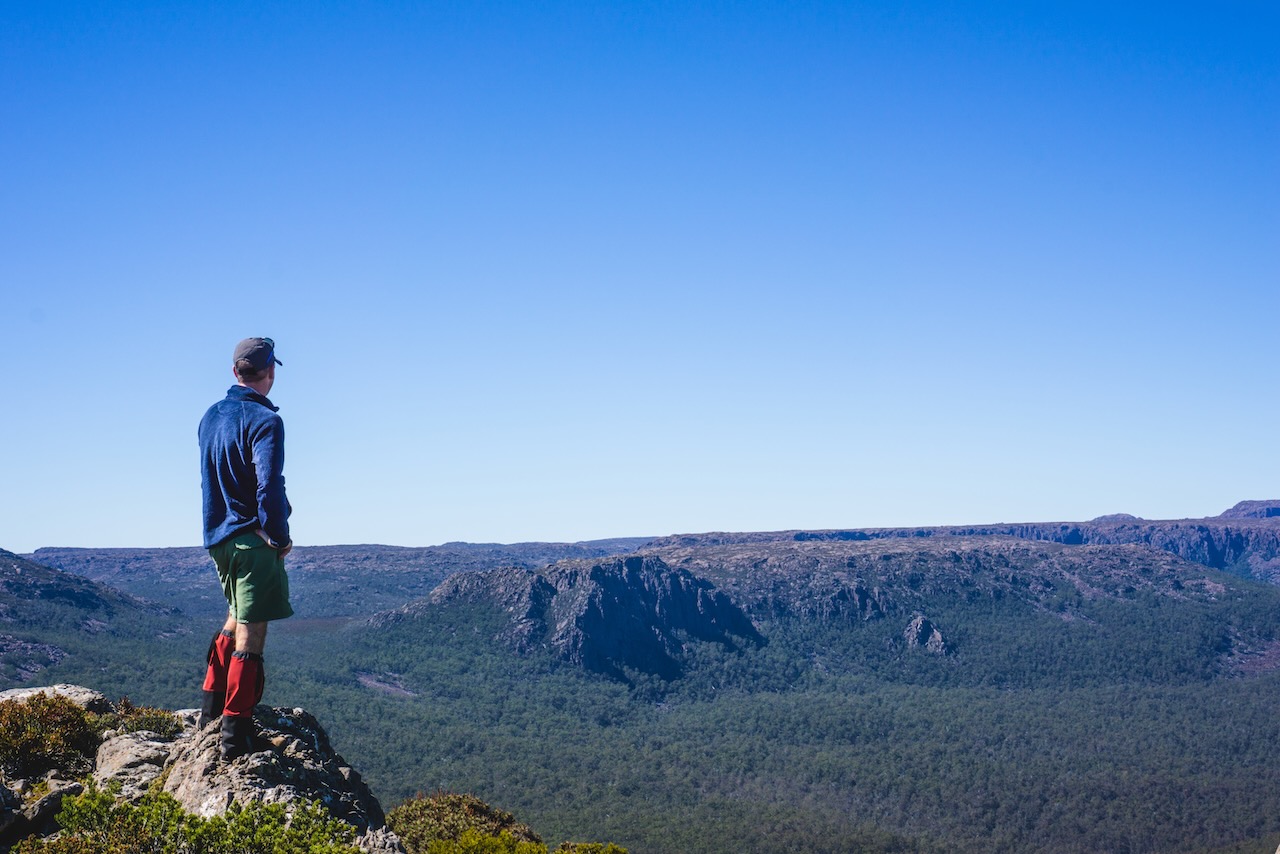 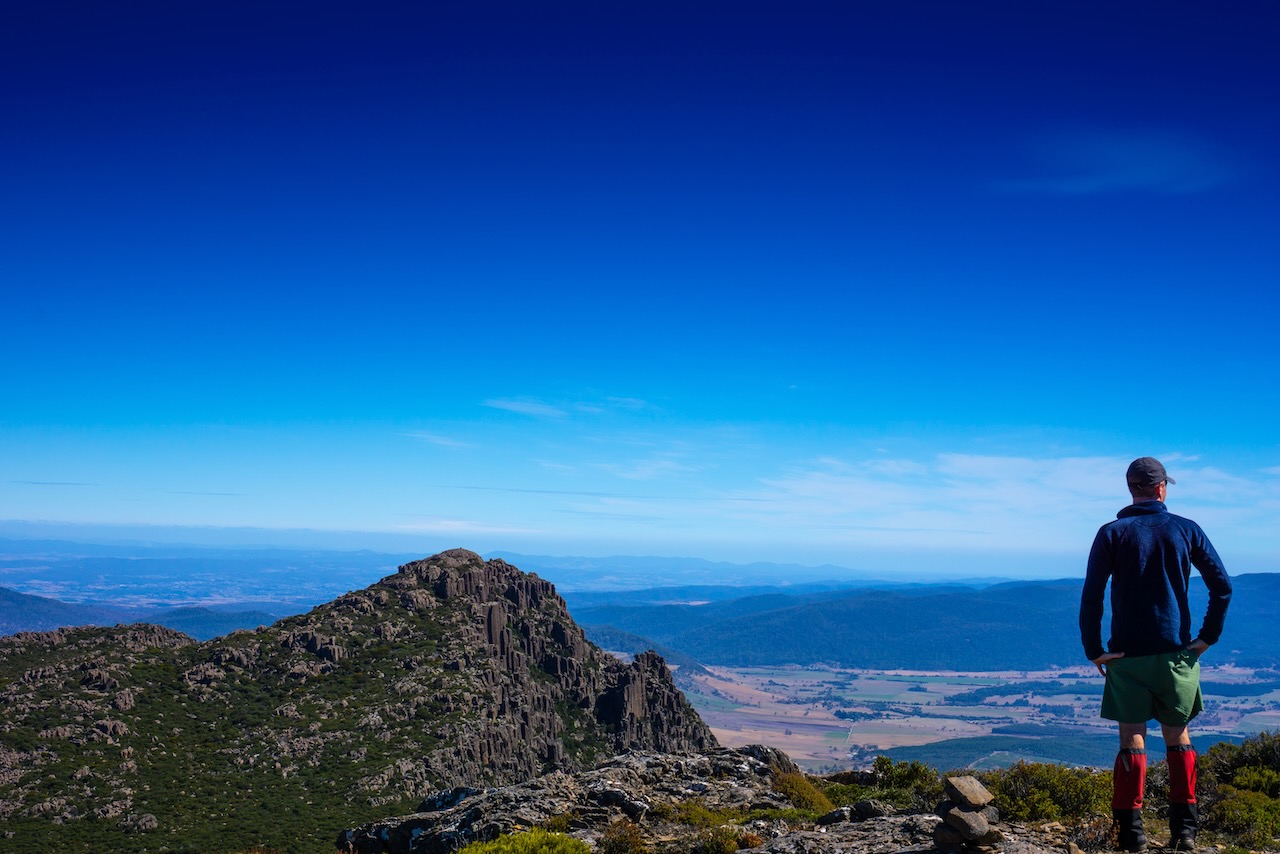 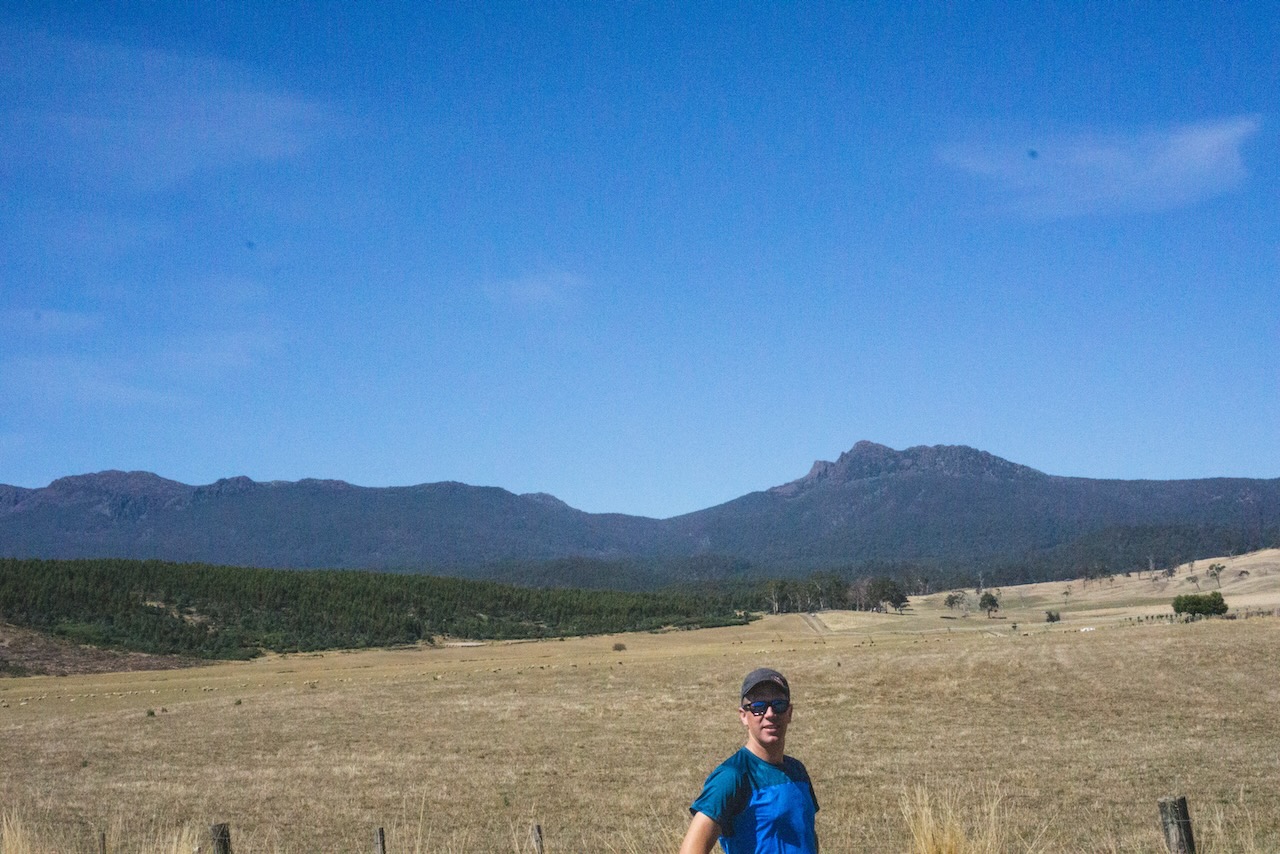