Winter was here... and Woolza had put the call out for the first winter walk of the season. Rat's Castle was the objective. We headed up on Saturday morning with a plan to meet at the start of the walk at Brandum. We'd then stay at Woolza's family shack by Great Lake and then do Sandbanks Tier the Sunday morning before heading home.

I headed out from Launceston solo and headed for the plateau. Woolza was coming from Hobart while late addition, Chris was coming from Bicheno. We were all on track to meet on time. I made good time via Deloraine and as I crested the final hill for the view of Great Lake I could see that it was shrouded in low lying fog. Above it though was blue sky as far as the eye could see. It was going to be a beautiful day. I arrived at Brandum at around 11am and got ready. Woolza and Chris arrived about 20 minutes later raring to go.

We did final gear checks and headed off the road and into some bush as described in 'The Abels'. It wasn't long before we hit scree and then started our way along a long tongue of scree to a much larger rock field. The slope was very gentle and we hopped along the small boulders before turning slightly south west towards some forest that led to the boulder field we wanted to use to climb to the main plateau. This was the only real bit of forest we went through and we were through it in 5 minutes before arriving at a steepish climb. We launched into this climb and in no time we were up on the edge of the main summit plateau with some amazing vistas below. We had clear views out to the west and could see the entire Overland region and just to our South we could see the trig point on the summit of Rats Castle. Awesome. We had been walking for 65 minutes.

The next section was through low alpine scrub, down a small depression in the valley before heading up to the main peak. We arrived on the summit 1hr 45mins after leaving the car. It had taken a little less time than we expected. On the summit, we took in the views with not a breath of wind bothering us. This was a great little peak and to be honest, I wasn't expecting this of 'The Rat'. What a great climb.

After an extended lunch on top we made our way back via the same route and we were making our descent off the plateau about 20 minutes after leaving the summit. We descended in shadows of the plateau and already out of the sun it was starting to cool off, with the moisture still on the rocks from the previous nights frost. We descended carefully and arrived at the base of the main slope to arrive at the forest we had come through earlier. We crossed through the trees approaching the very lengthy final scree fields.

Tom and Chris were both ahead of me - I was taking my time, as this afternoon I felt clumsy. I'd slipped on the rocks a couple of times so wanted to be careful. As we came out of the final forested section I looked up and saw the boys in front, then as I went to look down at my footing, I stepped on a large mossy rock and my foot slid, finding no purchase whatsoever. Next thing my foot slipped off the boulder and down into the crack between the boulder and another large rock. My leg was deep in the crack to about calf deep. As I kept moving forward and tried to regain control, my weight shifted to the point where it was all on my wedged leg. Before I could stabilise my position, it was too late. I continued falling forward with my leg wedged. Before I knew what was happening I heard an almighty crack! before falling on my side.

My initial thought is that I had trodden on and broken a large branch in the crack between the rocks. That explained the snapping sound I heard. I was now seated on my bum and went to stand up with my foot still in the crack. I got up about 5cm before an almighty pain went through my leg. 'SHIT!!' was my first thought. I sat back down, took a couple of breaths and then used my hands to lift my leg out of the crack. I had boots and gaiters on so it was hard to assess but my foot wasn't dangling when I lifted my leg so it mustn't be too bad. The boys ahead had now turned around to see what was going on. I put on a brave face 'I think I've done something but I should be ok'. I then managed to gradually lift myself with the aid of a branch as a walking pole.

I could stand. This was good. However I could only really stand on my left leg. This was bad. I tried to put some weight on my right leg but immediately  had shooting pains - probably some of the worst pain I have felt. 'Yucky' I thought to myself. This is not good. After a few steps on the pole, I thought I would be ok to walk out. If I didn't twist my foot or leg at all and just used the leg as a very basic support between steps with my left leg, then I could walk in a way that didn't cause excruciating pain. I figured the worst of the walk was out of the way so I'd get out to the cars ok.

We moved on albeit with me at an extremely slow pace. In my head though I knew I had a few km of scree to cross so this was going to be a massive f*&#ing challenge.

It took a while, and we even managed to have a laugh along the way. We debated about the severity of my injury. I thought I'd probably be ok to go to the shack in the evening and have a couple of beers. After a couple of hours we arrived at the terminus of the scree fields. A sigh of relief was breathed. Not far from here. We crossed the final scrubby section and arrived back at the road at dusk, nearly 5 hours after leaving. I figure 'the incident' had added about 1.5 to 2 hours to our return journey.

We arrived at the cars and got out of our walking gear. I took my gaiters and boots off, followed by socks. The sight that greeted us shocked to say the least. We all looked and the only response I got was 'you're going back to Launceston now'. My ankle region was severely swollen and it looked as if perhaps something was broken but we couldn't be sure. Bugger. My first concern was that my mountain climbing career could be in jeopardy....

We had 3 cars so after a small test drive along Brandum I decided I could drive with minimal pain or discomfort. I farewelled the boys and slowly made my trip back to town. I remained in contact with the boys incase the situation worsened but all was ok and within an hour and a half I was in the emergency department at the Hospital.

I called my wife from the hospital and she came down (she's a doctor) to greet me. Her initial thought was that it might be ok. After an X-ray, on which nothing could be seen, I was sent home to ice my ankle. It looked pretty purple and bad but it was decided it was a bad sprain.

I spent the Sunday resting, then on the Monday I went to work. I couldn't put shoes on so had some thick socks over my strapped foot. During the day at some stage I saw a radiographer friend and he said it 'wouldn't hurt to get an MRI done. Just pay to have it done - then you will know exactly what's wrong. You don't want your ankle healing wrong if you do a lot of walking. Worst case it's all ok and you're out of pocket for the MRI'. What he said made sense. I instantly called a doctor mate and had him do me a referral for an MRI the following morning.

I hobbled in to the MRI room and lay down. 'Just be a little while' I was told. After a lot of mechanical whirring the machine stopped. About 5 minutes later, the technician came in and said 'can you just wait there, we have to call your doctor'. Not good. 'what's that?' I said 'why do you need to do that?'. You have done some pretty bad damage and the bone in your leg is also broken. #$!@#$@!!!

After this, wheels went into motion. As I've worked extensively in healthcare for years I was able to squeeze into a surgeon for further assessment and by the Friday I was in the operating theatre having a screw put into my ankle. I had destroyed all of the ligaments in my ankle and cracked the tibia up the bone. I needed a screw through the tibia and fibula to stabilise them and allow the ligaments to regenerate. This would mean 2-3 months of no weight bearing before the screw would be taken out. I was meant to be going on a family trip to Europe (with wife and 4 young kids) in less than a month. Hmmmmmmm.

I spent the weekend after the surgery feeling sorry for myself but with no pain. I like to be doing stuff all the time so a few months on crutches was going to be a battle! But we went to Europe and it was awesome! Glad to report I've done many mountains since and the leg is like a brand new one!!! Let's climb more Abels! 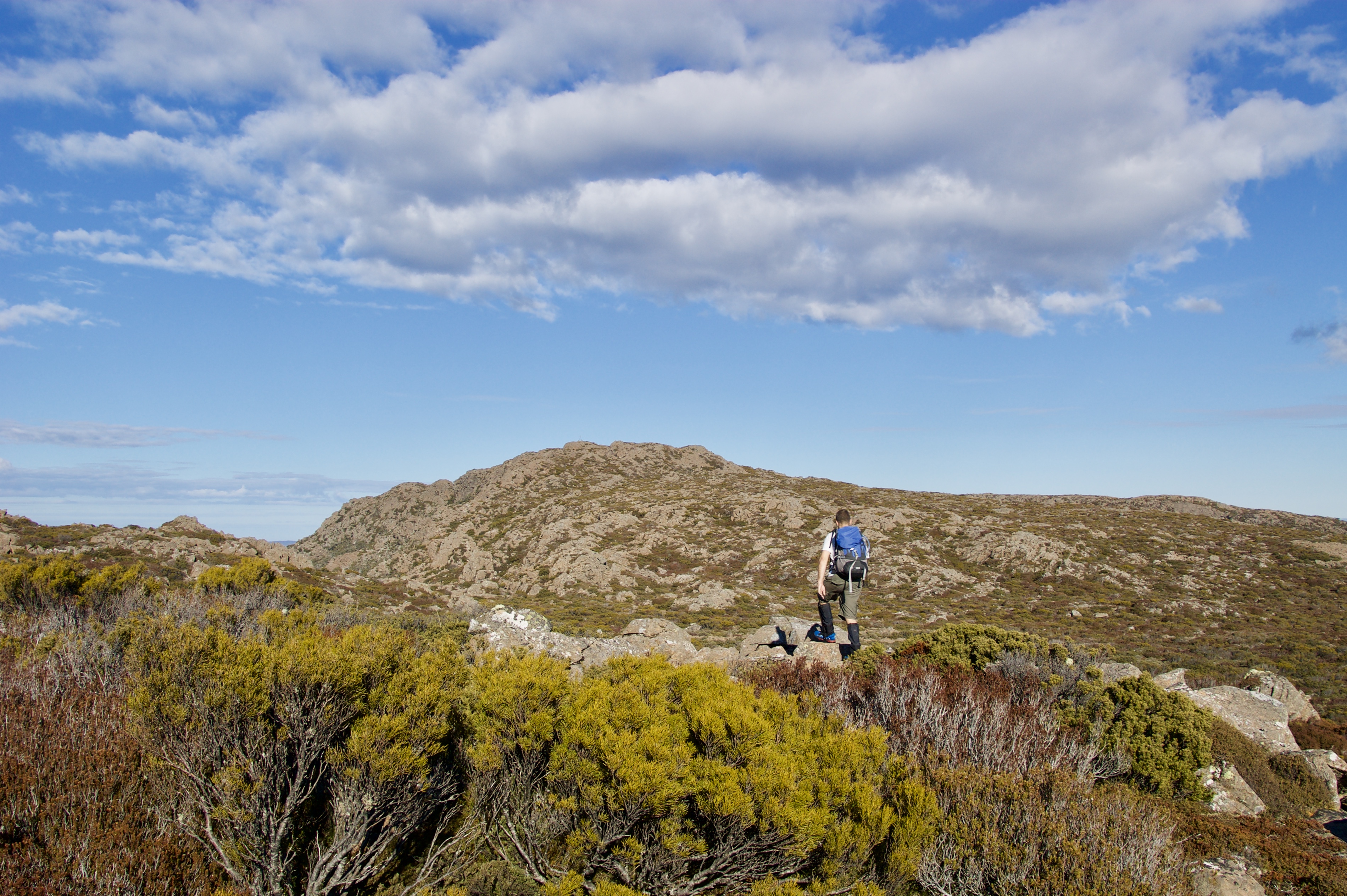